My Mother recently prompted my ex-boyfriend to collect somethings that he had stored in and around her shed via certified mail from the sheriff’s office. He had left these things on her property after he and I broke up 16 months ago. She and I made repeated attempts to have him remove them.

He still felt that my Mother had done him a great wrong.

Which I guess is what prompted him to yell at my Mother: “About you’re daughter, NO ONE BECOMES A LESBIAN OVERNIGHT! “

My Mother told him to go to hell and went back into her house. ( Yes she is pretty awesome!)

He may be sick & narrow minded but he is right about one thing: I did not become a lesbian overnight.

It took decades for me to be who I really am.

I identified as bisexual beginning at age 17.

I wasn’t sure I could be gay because I had been with boys.

The first time I had sex it was with a boy.

I always chose men because they chose me.

I never considered a single man that I was with until he paid attention to me. I never looked at a man and felt the things that I felt (and feel) when I looked at a woman.

I went through puberty in the age of day time talk shows in the 80’s. On several of these shows I often heard that women just didn’t feel the same level of sexual desire that men do. I heard women who were supposed to be experts saying that women were attracted to men after getting to know them. And these same so called experts said that women often needed cuddling more than sexual fulfillment.

I also heard “experts” saying on these talk shows that same sex attraction was very common in teenage girls but that they usually out grew it when they became adults.

As a young girl I thought that women just didn’t feel the same level of attraction that men did.

And I thought that it was normal for me to feel attracted to and develop deep emotional attachments to my female friends.

I struggled in relationships with the opposite sex for a multitude of reasons.

Among the reasons that I struggled was the fact that I sometimes wondered if I needed to end the relationship because I was actually a lesbian.

When I am my true self, I allow others to truly love me

When I fell in love with my girlfriend a million puzzle pieces fell into place.

I knew who I was and what had been missing.

A million realizations fired off in my brain and in my heart.

It took me 30+ years to meet her and be my authentic self.

My ex-boyfriend was right: I didn’t become a lesbian overnight. I always was. It just took a very long time for me to live my truth.

Epiphanies come upon me of late like waves crashing on the shore. Within the past few weeks I have come to understand that I have been standing in my own way.

I mostly have done this through my impossible expectations. I will have a picture in my mind of how things are supposed to be.

I will fall off of the edge and into the pit of dark despair when the picture never comes to fruition. I set expectations for myself that are not humanly possible to meet.

With people I will not trust what I see and know within myself about them because I want to believe the picture I create of them more than I want to know the truth they show me. When I can no longer push the truth down and it doesn’t match the picture I have created, I feel betrayed. I feel like I have failed.

Iyanla Vanzant sums up the reason my relationships failed

My only goal right now is to remain open. As a result, I am very sensitive and emotional lately. I find myself getting choked up and/or crying easily.

I am profoundly afraid. I have absolutely no idea what is going to happen or what I am doing. I never really did. I don’t think anyone does. However, up until very recently, I had those pictures that I had created. And I thought I was headed toward them.

My heart has been cracked wide open. I will allow it to remain so. Sprit has been guiding me to simply BE OPEN. So, I will simply be afraid. I will be confused. I will cry or become teary. I won’t apologize for it. I believe I am being guided to truly embrace all that happens instead of resisting it. 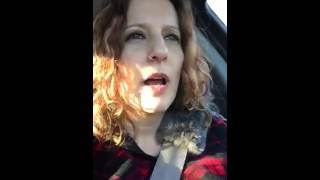